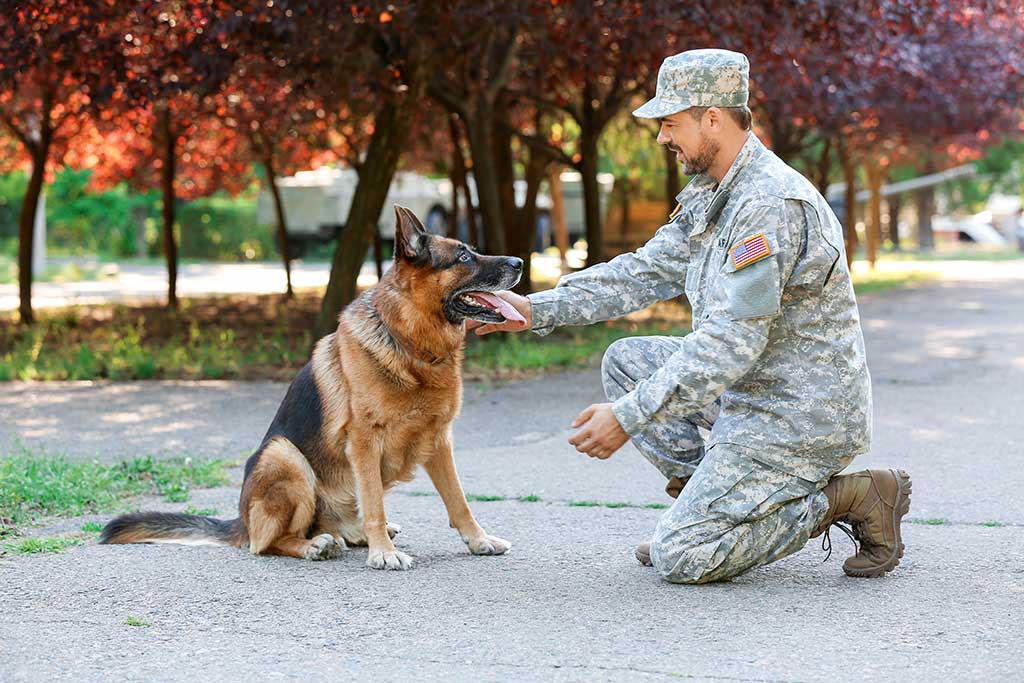 Without question, German Shepherd dogs (GSDs) have earned their way into the spotlight as one of the most prized canine companions of all time. These dogs have deep roots in history as working dogs. German Shepherd credentials have involved everything from fighting alongside soldiers in war and fighting crime to standing guard for some of the most prominent people.

Even though the GSD was initially bred for herding animals, the devout loyalty and strength of the breed quickly made the dogs candidates for war dogs. These intelligent dogs had their place in both World Wars, and in Germany during the Battle of Berlin and even during World War II. After World War I, the reputation of the GSD spread far and wide. For that reason, European countries, Africa, South America, Japan, and other far-eastern countries began importing dogs of the GSD breed.

Chips, a GSD tasked as a tank guard in WW2, captured 15 enemy soldiers, saved his partner’s life, and even gained both the Silver Star of Valor and a Purple Heart when he came back to the U.S. after the war. During the Vietnam War, an astounding 4,000 trained dogs, many of which were German Shepherds, served alongside trained handlers.

GSDs are not just popular in the United States; these dogs have made a name for themselves all over the world. The La Societe du Chien Berger Siegerschau is the national club for German Shepherds in France. The breed frequently serves customs agents, guards, and officials by helping scout for missing people or criminals or catch drug smugglers. Sweden currently has a corps of German Shepherd Dogs, which trains dogs to work in avalanche sites to find buried victims. The corps stands as an educating example for search-and-rescue with dogs around the globe.

While GSDs are no doubt respected for their working roles, it is the everyday heroes that can really come as a surprise. The intelligent, lovable nature of the GSD makes it a prized family or companion dog. However, these dogs are so intelligent, they have made the news on numerous occasions for stepping up and saving lives.

In 2007, a five-year-old GSD named Moti saved his family from an intruder with a gun. Moti took a bullet and fought off the intruder, and then made a full recovery to spend the rest of his days with his family.

A Texas-based German Shepherd named Bear learned on his own to detect when his owner was about to have a seizure. One afternoon when Bear’s owner wanted to go outside for a walk, Bear tried to prevent her from going but she ignored him. She had a seizure just beyond the door, fell down the steps, and was knocked unconscious. Bear proceeded to scratch on the doors of every house in the neighborhood until he found help for his owner.

In 2018, a GSD in Washington named Rex fought almost to his own death to protect his 16-year-old owner from attackers who broke into their home. In spite of being shot and beaten by the intruders, Rex continued to work to protect his owner who was hiding in the closet.

Make a Hero Part of Your Life

Without question, German Shepherds deserve to be known as one of the most popular dog breeds in the world. If you are looking to bring one of these heroes into your life, reach out to us at Delta K9 Academy!